Hanukkah, the Jewish festival of Lights 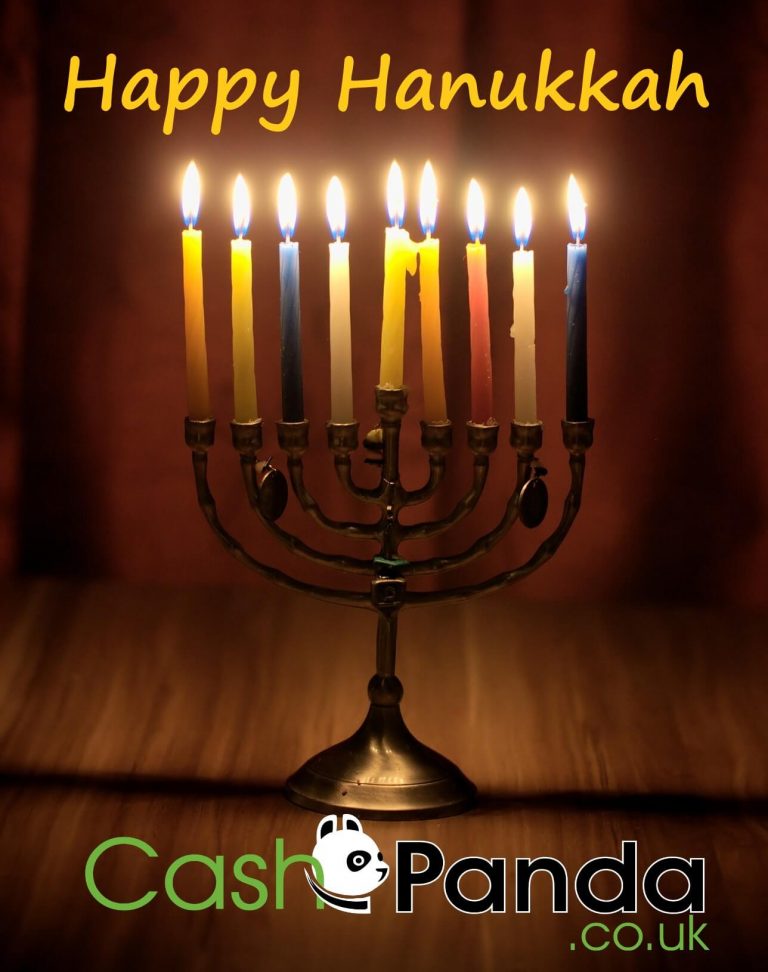 Hanukkah, the Jewish festival of Lights

CashPanda.co.uk your trusted partner for short term and payday loans wants to to wish all who celebrate a Happy Hanukkah!

Hanukkah is the important Jewish festival of lights. All around the world people of Jewish faith give gifts and prepare traditional food, play games and celebrate lighting up the menorah.

Hanukkah is in fact a celebration of an event that took place in Jerusalem long, long ago, at a time when Jewish residents of Judea were under the control of a wicked Antiochus, the Greek-Syrian king, of the Seleucid Empire who attempted to force Jews to worship Greek-Syrian gods and abandon their own religion.

Jerusalem was attacked by Greek- Syrian army, in the process killing many of its Jewish residents and desecrating the Second Temple, a very important holy site for Jews in that city. This was, of course, a long time ago, around 168 BC, but the attack on their holy city has never been forgotten by Jewish historians and Jewish people generally.

The Jews under a tough guy called Judah Maccabbee rose up in rebellion. They eventually drove the Greek army out of the city. They cleaned the temple from Greek idols put it back to its original state and lit the big menorah which was the centre of the temple.

The Hanukkah Festival is a remembrance of heroism of the few against the many, of light overcoming darkness, and oppression into freedom.

The Miracle of Hanukkah is that the temple’s menorah was cleansed and lit up following the retaking of Jerusalem by Maccabbee’s warriors using lamps that used olive oil.

However, there was only enough oil to last only a single day, but by a miracle, it lasted eight full days!

The unexpected extension of the lighting of the menorah gave enough time to source sufficient olive oil elsewhere so that the tradition of keeping the light alive could keep going.

The Hanukkah festival today lasts eight full days in commemoration of the Hanukkah Miracle. It involves lighting up the menorah and the use of lights of all kinds themselves is still so much a part of the celebration today. As well it’s a big tradition to eat oily foods such as hash blown, and tasty doughnuts. 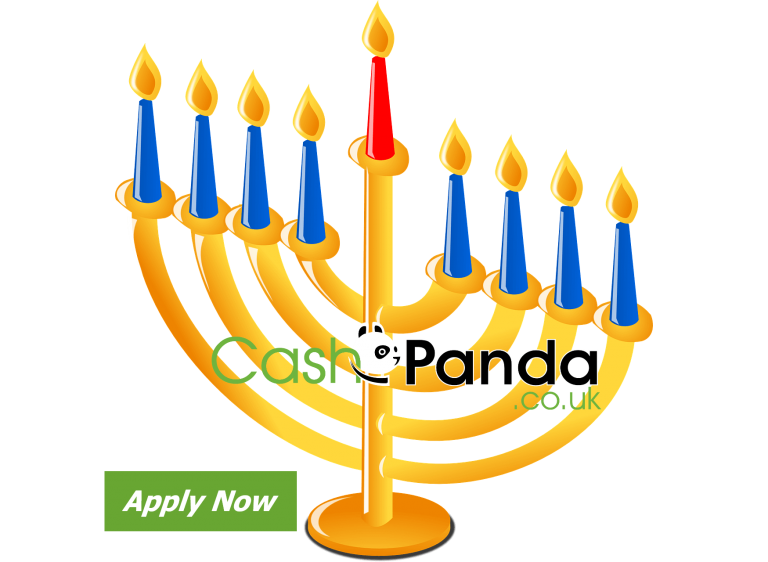 What celebration would go on without feasting and gift giving? Hanukkah is also a time when people give gifts to their kids and tell them about the story of the Maccabees bravery.

It is a tradition to celebrate Hanukkah by lighting up the menorah, a candelabra that holds nine candles. One candle is lit every evening, for each day for eight days to remember the significance of the ‘miracle of light’ as well as let the light concur darkness.

It is a fun filled family celebration with tasty oily foods such as “potato cakes – latke” (Hash Brown) and loads of different kind of doughnuts.

Kids play with a dreidel, with 4 letters (B, M, H, T) on each side, meaning Big Miracle, Happened, There (Jerusalem). 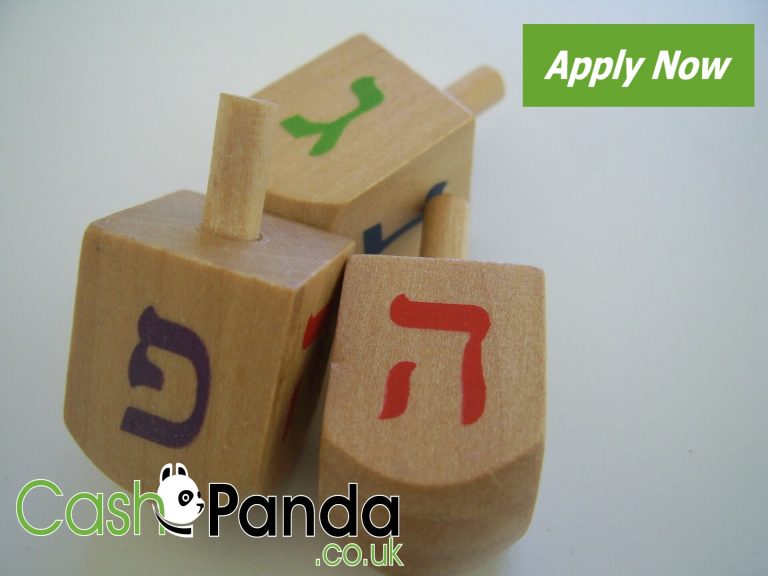 Kids are getting gifts called ‘gelt’ from their parents, a common gift are chocolate coins and small toys. Some cash gifts are given to children to tech then the values of charitable giving.

From Darkness to light

Hanukkah is a happy celebration, representing to never be afraid to stand up for what is right. Always increase in matters of goodness and a little light goes a long way.

Cashpanda.co.uk wishes you and your family a happy Hanukkah, let the light inside you shine the brightest.

If you need a short term loan from a top lender please visit us at Cashpanda.co.uk for a free not obligation quote.

If you are considering a loan please make sure you can afford to repay it back in time. Late repayments can cause you serious money problems. For help please go to moneyadviceservice.org.uk 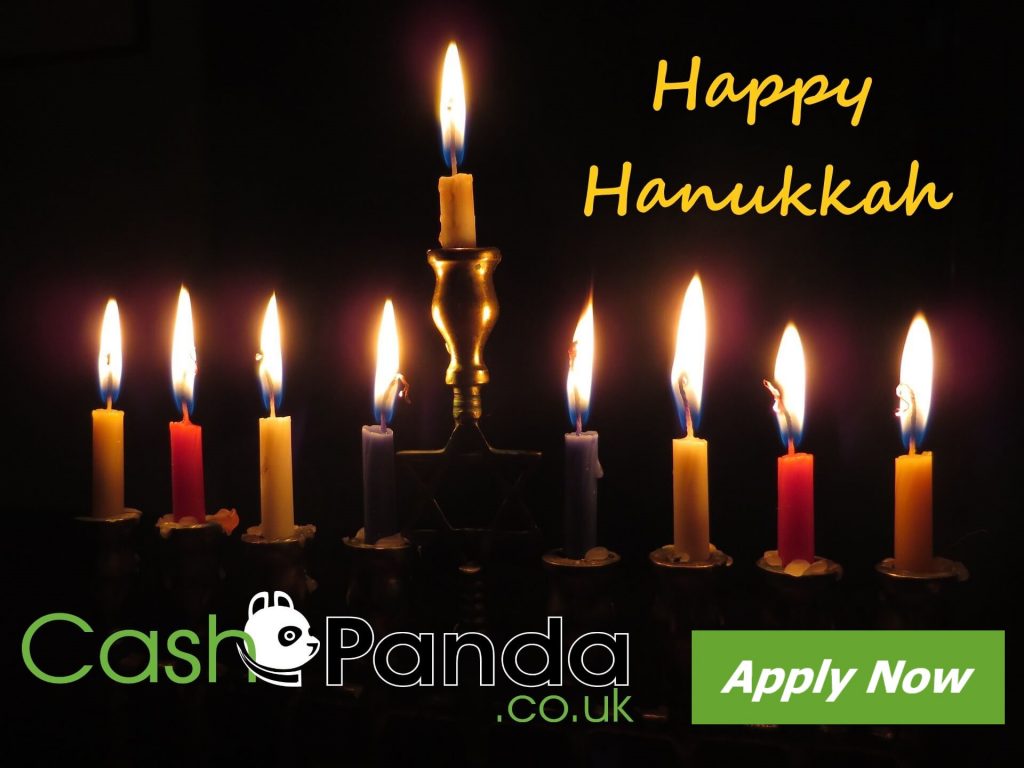